16-year-old Karman Kaur Thandi looks to be a terrific talent. Last week, when Dabin Kim scythed through the field to win a Futures title, the only player to give her a very close fight was Karman Kaur. This week, she has started by beating Rishika Sunkara in straight sets.

This might appear premature, but when a young player announces herself in this way, we are always tempted to bend our rules to start a thread!!

You're always bending the rules and starting the threads anyway

Yes, way too early, I think. I hope Karman justifies the faith imposed on her by PKB.

Agree with Sameer, too premature.

I hope I'm not that aggressive!). After all, she beat Shweta Rana 63 61 last week on the way to the singles SF, and this week she has beaten second-seeded Prarthana Thombare 63 63 in R1. We do have a thread for Prarthana for some time already -- and Prarthana has won two Futures titles (in Chennai and Hyderabad) this year, after winning a 15K Futures in November last year (triggering her thread). The fact that Karman (who turned 16 on 16th June this year) is able to beat #338 Prarthana in straight sets suggests terrific potential -- hence this thread. (Of course, I hope her age has not been fudged, but I am only going by what her reported age is; to be doing this at 16 is impressive indeed, and pretty rare among Indian players in recent times).

I hope I'm not that aggressive!).

Oh, thanks for pointing that out, PKB, it should indeed be reposed.

At least of couple of these early started threads have proved to be fruitful so far - Yuki & RamK . Hope this one proves to be a long one too.

There are under 16 and under 14 tournaments held dubbed as WTA future stars tournament among Asian youngsters on the sidelines of the WTA tour finals which start off in Singapore today.

There were 24 players in each of the sections divided into 4 group and the winners of each group played in the SF. Our girls - Karman Kaur Thandi in under 16 and Mahek Jain in under 14 both reached SF and Karman has now reached the final there.

This is the related news -

No, Sameer. There were two groups - Purple and Pink in both the U14 and U16 categories. The top 2 players from each group qualified for the semis. Karman will face the same Taipei girl in the final who came second from her group. Karman had beaten her 6-3 6-2 in the group stages. Mahak lost in the semis.

Ok, thanks Vatsal for that clarification.

Karman comfortably won the final 64 62. A pity I didn't realise she was playing here until earlier this evening -- otherwise I would have loved to see her in action live. Here's the report from the WTA site:
http://www.wtafinals.com/article/wta-fu ... al/4231858

This livescore site http://www.definish.com/tennis/ shows Singapore results for today as (SF)Karman Thandi bt Hsiang-Wen Huang 6-4 6-2. I was confused. Thanks for the clear picture. 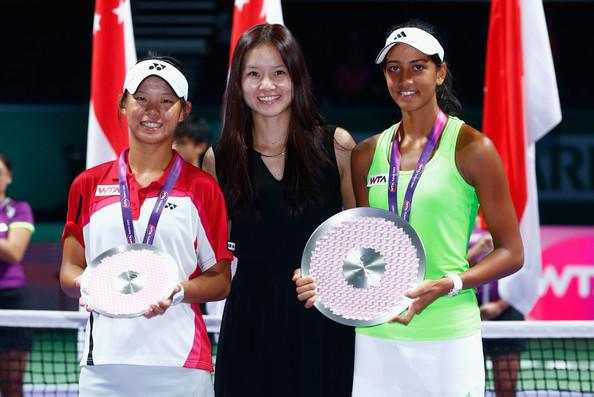 What a great moment for Karman Kaur!

She is tall! Tallest tennis player I have seen from India. 16 year old and already 6 ft tall.